Maria Dietrich
Coop Himmelb(l)au, the world-renowned, avant-garde architectural studio located in Vienna, has won the international competition for the “Science & Technology Museum” in Xingtai, a city with 7.3 million inhabitants and China’s most air-polluted city. The concept is part of a newly designed cultural district, which is why it offers wide public green spaces and clean air using innovative technology.

“It is obvious to us that we have to put our high-tech era at the service of the health of generations. As part of the ATMOS Selfness Resort project, we have been conducting research for years together with Wolf D. Prix and Coop Himmelb(l)au, at the interfaces of architecture, urban planning, sensitivity, air quality and quality of life. We have used the know-how that we have gained over the years in the international competition in Xingtai, which is one of the world’s most polluted cities. The fact that this concept has won clearly shows that we ask the right questions and have come up with much longed-for answers. And personally, it is an honour, great joy and most of all recognition for our team at ATMOS Aerosol Research to have contributed with our technology to the great victory of Coop Himmelb(l)au and to play a part in the creation of the Science and Technology Museum,” says Chris Müller, CEO&Founder of ATMOS Aerosol Research.

No Columns – no Gravity

The building once again applies the principle of “no columns – no gravity” and the gigantic roof construction seems to float. At the same time, it acts as a projection screen for public events; inside the design takes up elements of a Chinese garden. Wolf D. Prix (CEO, Founder & Design Director) describes the exceptional cloud concept as follows: “The cloud has not only always been Coop Himmelb(l)au’s claim and signature, it is also a transforming, poetic metaphor. A rapidly changing element of the sky, endowed with immense significance for the climate and existence of civilizations. The Science and Technology Museum Xingtai will reflect this in its design, content and innovative functions”. 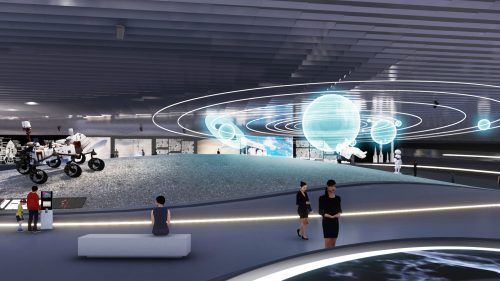 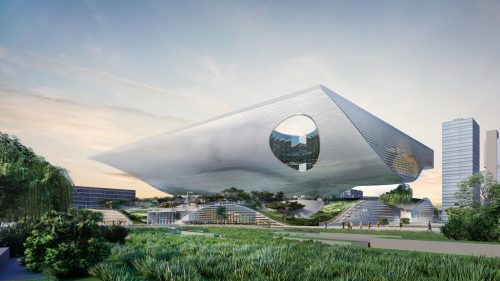 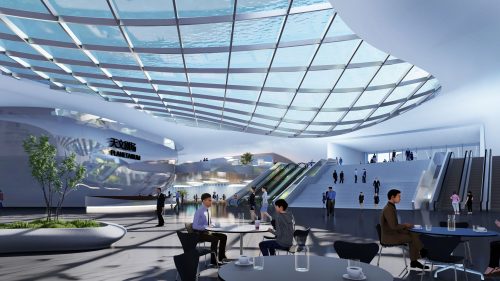 A sensing part of the city

One of China’s great challenges is the quality of the air in the highly industrialised state. In 2013 Xingtai was already the city with the most polluted air in China. Buildings by Coop Himmelb(l)au are not only characterised by unusual shapes that look like clouds. They always interact with their environment – in the context of society and/or an environment-technical context. In this case, the team also wanted to take account of the surrounding air and clouds. Together with the team of ATMOS Aerosol Research, the building turns into a sensing station that enriches its surroundings due to its sensitivity and highly technological features. Using sensors in the façade and satellites in space, it identifies its ambient air and changes it into energy and clean air. This is a worldwide unique project that turns smart buildings into sensitive city districts.

Christoph Steindl, Founder ATMOS Aerosol Research: “ATMOS Aerosol Research will not only be responsible for the scientifically sound consulting in the development process, but also for the monitoring during the operation of the building complex, that is the monitoring of the air quality using sensors and satellite measurements. Furthermore, we are currently doing research and are developing further prototypical projects worldwide in collaboration with Wolf D. Prix and Coop Himmelb(l)au.”

The actual work began much earlier. Already during the conception of the ATMOS Selfness Resort, the multi-professional team worked on the topics of air, life and health. Christian Federspiel, Founder ATMOS Aerosol Research: “New technologies are part of our core business. It is always a pleasure to see our technology applied in practice. It is a special moment that a world-famous architecture studio – like Coop Himmelb(l)au – takes up this aspect in its conception. With ATMOS Aerosol Research, a highly complex algorithm can now improve the quality of life of millions of people.” 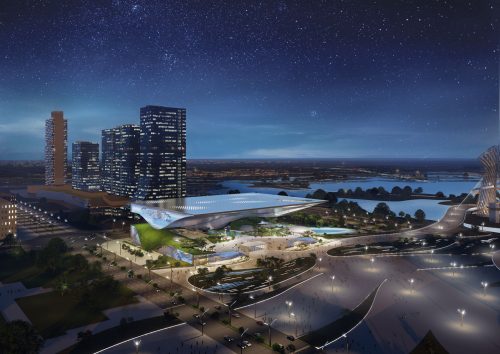 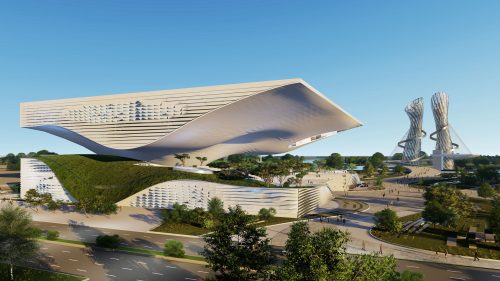 Coop Himmelb(l)au is once again setting new standards in architecture, technology and urban planning, which thus fit in well with the installation of a Science & Technology Museum. In the highly air-polluted city, particularly bad air will be detected with the help of satellite technology, sucked in and subsequently converted into energy and fresh air. As a result, the green open spaces and the interiors will be filled with healthy clean air.

In addition to the museum, the building also houses studios and laboratories for art, research and collaboration. There is also room for cinemas, stages, presentation and learning venues, as well as shops and restaurants. The building was organised in such a way that internal and external, real and virtual spaces complement and define each other. The predominantly public spaces have been arranged in such a way that they function as interactive learning zones and create new perspectives on both the city and society. The interior of the 55,000 m2 building is modelled on a three-dimensional Chinese garden, the paths of which lead through different zones. Visitors can learn here, discover new scientific findings and interact with models.

The three most important architectural interventions are: the public space under the roof with green fresh air. The roof is an experiment in terms of construction and as third intervention there are two towers located near the building in the park. This is where the smog air is cleaned and the fresh air rises through the landscape creating a very comfortable and healthy zone. The building itself has a very complex but floating structure that captures and embodies the dynamics of scientific development in China. 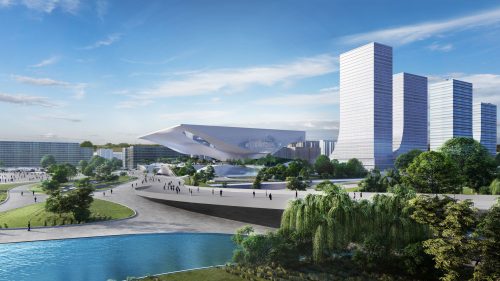 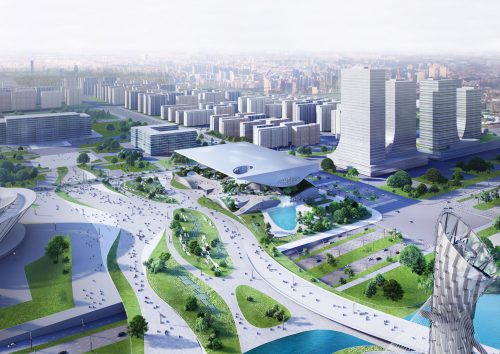