Jacqueline Gindy
“The unique privilege of a carefree life also entails obligations for me personally,” says Tina Heckler, who is a great supporter of ATMOS and has been managing WEITBLICK since 2017. She met Chris Müller during a private appointment about two years ago. She had not known his story and ATMOS before and was enthusiastic about the vision of the project “When I got to know Chris Müller in 2017 and he told me about his initiative ATMOS and his reasons for doing so, he caught me from the first second”.

She wanted to support the ATMOS project, but didn’t really know how, because she was in the “starting blocks” with WEITBLICK at that time. In the first step she simply used every opportunity and mentioned ATMOS. In the second step she considered donating a part of her turnover to the non-profit organizations in the fight against cystic fibrosis.  “For me it is a matter close to my heart and at the same time an obligation to contribute a small part to this great initiative. The incurability of cystic fibrosis must not be accepted,” continues Tina Heckler. 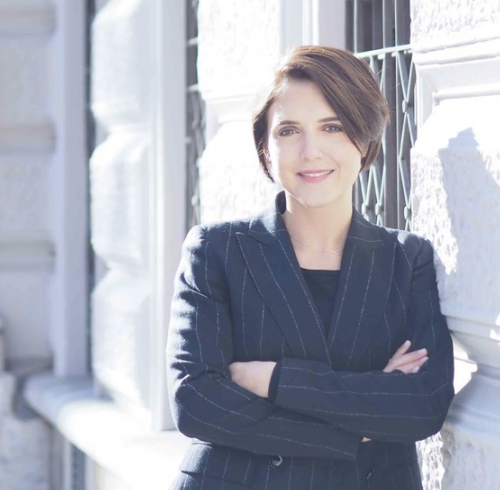 She has headed WEITBLICK since 2017 and has been Brand Manager Aethetics & Buisness Development Manager at Merz since 2018. She is often described as honest, loyal and empathetic and as a valuable asset with an open ear and attentive nature. She likes constants, but is also enthusiastic about spontaneous ideas. With a lot of positive energy and a young entrepreneurial spirit, she is reliable, consistent and full of verve.

Her professional career began in Frankfurt with a dual course of study “International Buisness” at Merz Pharmaceuticals GmbH, where she completed her bachelor’s degree at DHBW Mannheim in three years and got to know many areas of the pharmaceutical business. During this time, Tina Heckler also had the opportunity to spend a semester abroad in Barcelona. During her stay abroad in Switzerland, she also got to know the Swiss OTC market from a marketing point of view.

After graduating, she decided to pursue a classic pharmaceutical marketing career that started in international marketing for OTC products. After one year she got the opportunity to go to Austria and market the national aesthetics portfolio as Junior Brand Manager. During this time she found her passion for working in a medical environment and wanted to deepen it accordingly.  Accordingly, she switched to “the other side” and took over marketing and controlling at a large aesthetic hospital. At the same time she completed her MBA at WU Vienna “Healthcare Management” in order to further expand her knowledge in the healthcare sector. In addition to the theoretical inputs, her studies brought her a broad network of various stakeholders in the healthcare sector in Austria.

As part of a spin-off, she then set up a new practice community and brand together with a team of doctors. During this time, she has seen the potential in practice marketing and also in practice marketing slumbering and has made herself independent with WEITBLICK, her practice consulting. Her projects range from marketing, finance and personnel to quality management. Their hobbyhorse, however, is clearly the holistic practice consulting with the focus on the patient.

WEITBLICK stands for holistic practice consultation with a focus on the patient. Tina Heckler’s goal in all projects is to achieve the optimum for the doctor, the practice team and the patients. She looks after doctors in all “phases” of the practice: from the foundation to the expansion to the optimisation of the practice. Of course, the digitalization of the medical practice is of great importance. Website concepts or the selection and implementation of patient administration programs or online appointment scheduling systems are of great importance.

But no matter which project she is in charge of, she always starts with the question of WHY. Whether it’s a website, an employee training concept or a new strategic orientation. WHY should the project be implemented? Only then does she devote herself to HOW and WHAT.